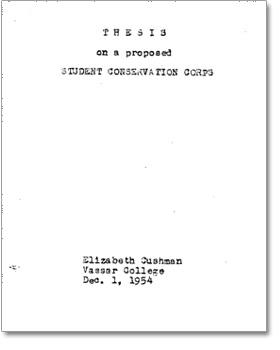 In 1954, Liz (Cushman) Putnam grew alarmed by naturalist Bernard DeVoto’s warning that our national parks were in danger of being “loved to death” by an avid American people.  In an article, DeVoto provocatively recommended closing the parks and surrounding them with Army guards until Congress appropriated sufficient funding.

As history has proven, Liz had a better idea.

Sixty years ago, she proposed a “Student Conservation Corps” (SCC) in her senior thesis at Vassar College.  The paper – 39 typed, double-spaced pages – earned an “A.”

Liz modeled her SCC after the CCC: the Civilian Conservation Corps, FDR’s 1930s public works program.  She reasoned the value would be three-fold, benefitting students, parks and the nation as a whole.  Already well advanced on the diversity curve, Liz wrote the SCC volunteers “would be getting a broader education – not only from travelling, but because they would be working with students from other walks of life.”

If the students proved of value to national parks, Liz noted the program could be expanded to other resource management agencies.  Today, SCA members serve at more than 500 federal, state and municipal sites each year.

Liz outlined an org chart, staff responsibilities, and a pay scale for the volunteers — $5 a week.  Liz noted students could “save it or blow it on a Saturday night.”

It was Liz’s Vassar advisor, Dr. A. Scott Warthin, who urged her to pursue her idea.  “He asked me if I would give it two years,” Liz recalls today.  “If he had suggested 58 years, I would have been flabbergasted!”