Throughout 2021, BP America and SCA continued to fuel youth conservation programs in the Greater Chicago area. This year we focused on equity and environmental justice. Youth identified environmental concerns locally, met with key public and private partners, and reacted with direct service. With BP’s support, SCA youth responded to community concerns with climate action through strengtheningwatersheds, planting trees, and forging urban resiliency. At the same time, together we provided important professional trainings and experiences for motivated and underemployed young people interested in entering green careers and advancingtheir communities through lifelong stewardship

BP AND SCA: CARING FOR OUR ENVIROMENT TODAY AND PLANTING SEEDS FOR TOMORROW

“The All Women’s Crew is a safe space for women to be able to focus on their work and not have to be constantly worried about their surround-ings. We have the safe space where we can enjoy being out in nature but can also work in the environment and help to improve it.”

The Women’s Crew worked in partnership with BP and the Chicago Park District’s Natural Areas Department to help manage natural areas at three parks on Chicago’s south side: Indian Ridge Marsh, Big Marsh, and Hegewisch Marsh. Their work focused on removing invasive plant species and promoting the growth of native plant species while also assisting with general park management, including trail maintenance and garbage removal. The areas in which they worked were dominated with invasive plant species, which aggressively compete with native species for resources and provide little to no benefits to native wildlife. Some of the invasive plants they worked to eradicate include purple loosestrife, garlic mustard, buckthorn, mugwort, non-native thistles, catnip, and more. 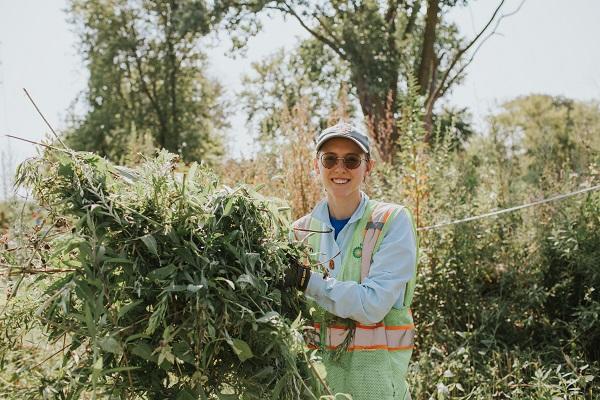 In order to remove these plants, the crew used a combination of chemical herbicide application, hand pulling, and power tools such as brush cutters and chainsaws. The crew improved 607,597.50 square feet of land by treating invasive plants at these parks. The crew promoted the growth of native plants by planting 3,962 plugs of native forbs, grasses, and sedges at these sites and by planting eight trees throughout Chicagoland. Additionally, the crew collected and distributed native seed throughout the parks, including those of milkweed, wild bergamot, Illinois bundle flower, and more.
In addition to the ecological benefits provided by the crew, it is important to consider the human communities surrounding the work sites. These parks are located in predominantly black and brown communities, which have been disproportionately impacted by industry and environmental pollution. While this work has promoted a balanced ecosystem that benefits wildlife, it has also provided ecological benefits to the local community including flood mitigation, cleaner air, and providing places for the local community to spend time outside and connect with nature. Unfortunately, due to restrictions put in place due to the pandemic, the crew was unable to work directly with the local community through as many volunteer events as in previous years. However, the crew was able to work with 29 different volunteers this season thanks to partnerships with various organizations including REI and the U.S. Forest Service. The crew was also able to help the local community through improving 24,799 feet of trails and removing 660 pounds of garbage within these green spaces

The CTCC has successfully planted a total of 500 trees during the year 2021. While working in the field, members practiced the best techniques regarding tree planting and maintenance. They successfully performed tree maintenance throughout the months of July through September.
The crew performed maintenance on roughly 3,000 trees that were planted by the SCA since the second CTCC program season in 2018. Weekly maintenance tasks included watering the trees with a minimum of 10 gallons of water per week, weeding the base of the tree, structurally pruning limbs for public safety and optimal growth, and staking leaning trees. During maintenance days, crew members were also taking note of any signs of damage, disease, or death. 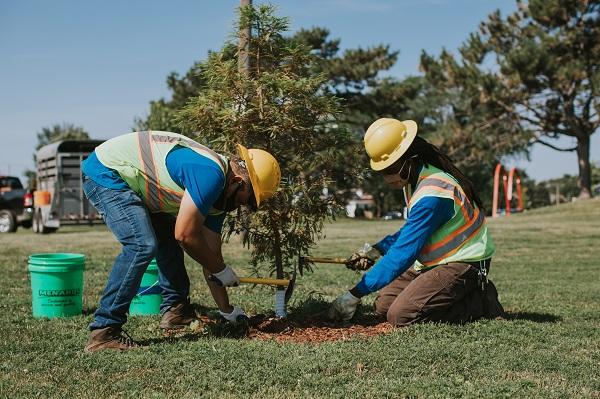 As the weather began to cool in the early parts of autumn, the team shifted their focus on mulching and planting new trees native to the region. The communities in which these trees were planted will receive a variety of benefits, increasingly as the trees grow and mature. A fraction of the benefits includes storm water retention, cleaner air filtration, sound mitigation from nearby trains and highways, enhancing wildlife habitat, as well as providing nuts and fruit for human and wildlife consumption.
To help facilitate further community engagement the Tree Crew hosted a series of engagement events. Planting trees in the community can also be a catalyst for community residents to begin inquiring about trees and other forms of urban nature. The goal for these events were to engage the community in a hands-on experience of tree canopy stewardship. These events were aimed towards community engagement through proper tree canopy stewardship, supporting new and existing volunteers, and informing community volunteers on the benefits of safe and effective tree canopy conservation. During locally held tree plantings the team led demonstrations with all age groups, adjusted to different weather conditions, and worked around various soil types and environmental challenges. The team hopes that by involving community members with plantings it will help to spark their interest in conservation and help them to form a deeper connection with their home and the planet.
The CTCC made a great impact on the youth throughout this whole year by working closely with elementary schools and summer programs. The CTCC partnered with the Wilderness Inquiry for a joint project in which students from various Northwest Indiana schools came out to Wolf Lake to plant trees and operate a canoe for a very enriching learning experience of the outdoors. The students learned about the importance of urban forestry, as well as how to plant a tree from hands-on experience.
The CTCC crew partnered with The Nature Conservancy and a landscape architect to engage with students at Abraham Lincoln Elementary School while building and caring for a pollinator garden located on the school premises. This was an educational opportunity not only for the elementary students, but for the CTCC crew members as well.
The CTCC was also pleased to help improve Seidner Dune and Swale Nature Preserve by aiding to make fire breaks in preparation for a prescribed burn. During this project, the CTCC crew learned about the role fire plays in assuring healthy native vegetation as well as how to operate small engine power-tools such as brush-cutters, blowers, and brush-mowers. During this project, the crew helped to clear around 2 acres of vegetation to create a fire break around the site’s perimeter.
This year the CTCC crew also focused on residential plantings. Partner contacts in the cities of Hammond, East Chicago, and Gary collected tree requests throughout the year from homeowners and compiled lists for the team. The 2021 CTCC season was a huge success in Northwest Indiana due to the continuous hard work, eagerness to learn, and enthusiastic teamwork contributions made daily by each member. They formed a genuine camaraderie between each other, and with all the partners throughout the season.