SCA AmeriCorps member Mike Adamovic knows a lot about SCA spirit. Not only is he in his third term battling invasives species and promoting watershed health with SCA’s Hudson Valley Corps, but he also spreads the word about the natural wonders of New York’s Hudson Valley through his widely published photography and nature writing. Mike was a featured alum in SCA’s 75,000 Alumni Campaign this summer, and recently served as SCA’s reporter-at-large during the Hudson Valley Corps 9.11 service event at Bennington Battlefield Historic Site.

On August 16, 1777, the American militia won a decisive victory against British forces in the rolling foothills of the Berkshire Mountains near the NY-VT border. The Battle of Bennington, as it was later known, prevented the British from seizing much-needed supplies and severing communication between New England and the rest of the country, thus putting down the American Revolution. The Battle of Saratoga is generally credited as the “true” turning point that achieved this — but without the win at Bennington, the British could have been well-provisioned enough to withstand the siege at Saratoga that ultimately led to the capture of over 6,200 British soldiers and coaxed France to support the American cause. Bennington Battlefield, now a state historic site, has been overlooked and forgotten over the years… but with the help of a three-day service project by dedicated SCA members, this little-known but hugely important site has been revitalized. 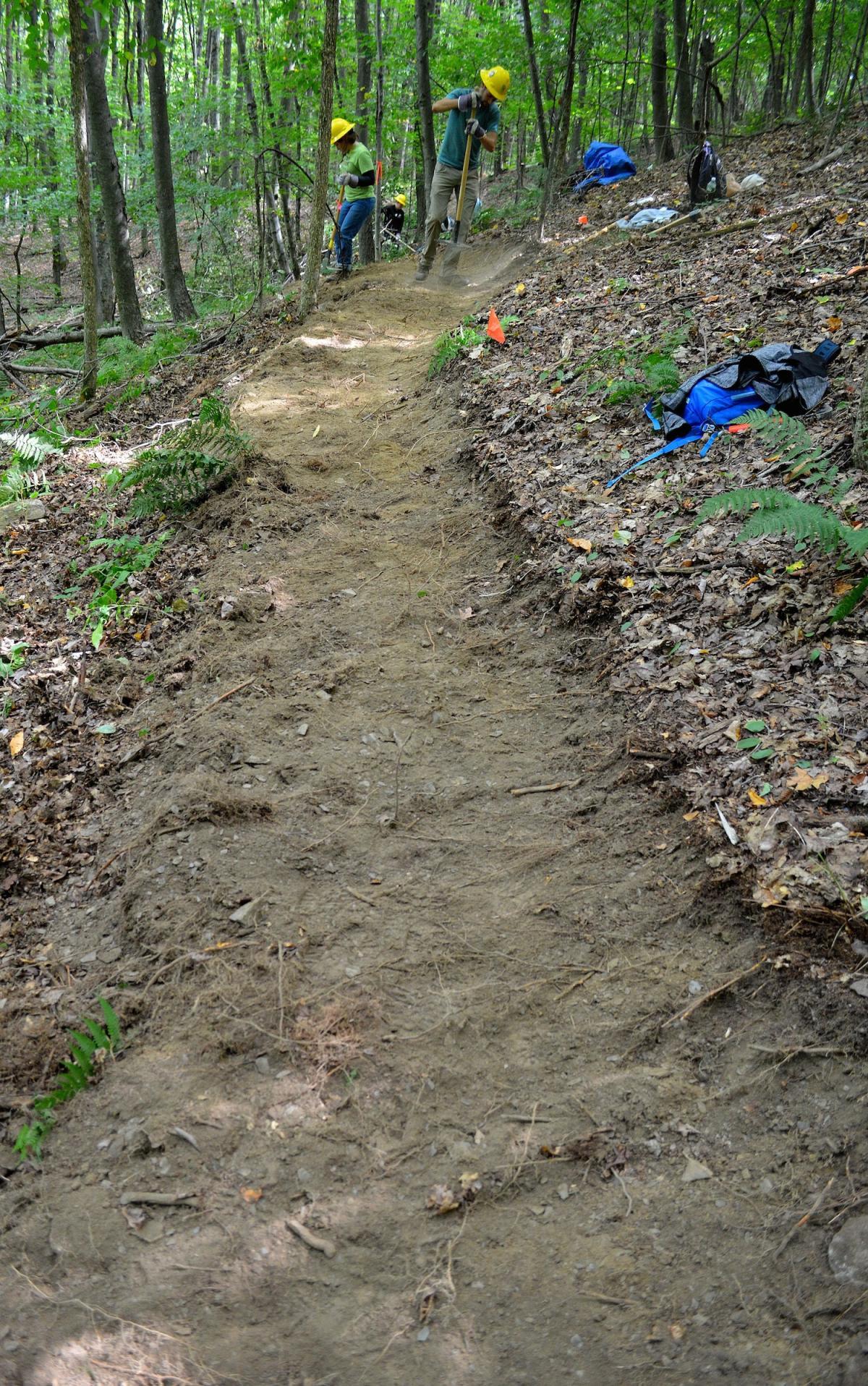 Members of the SCA Hudson Valley Corps arrived on site on the morning of September 10th. After a short introduction on safety and trail building techniques, we began to construct an entirely new trail system. Three routes were established: two loop trails (an eastern and a western) and a short connector trail to link both. Apart from the basics of blazing the trail and establishing a firm tread, several more technical maneuvers were required to ensure a level and hazard-free track. Bench cutting, a process in which a triangular wedge of earth is cut from the hillside to flatten the trail, is a slow, tedious process — but that didn’t stop 40 SCA AmeriCorps members from carrying it out in record time, despite the fact that over half of them had no prior trail-building experience.

After work had ended on the first day, Phyllis Chapman, a historical interpreter, gave us a detailed account of the battle, along with some natural his

tory notes on the surroundings — such as introducing us to the oldest hawthorn tree in the country, which was probably a sapling during the battle in 1777. We learned that the trails we were creating followed the approximate routes the Americans would have taken to attack the fort at the top of the hill where the enemy soldiers were dug in. 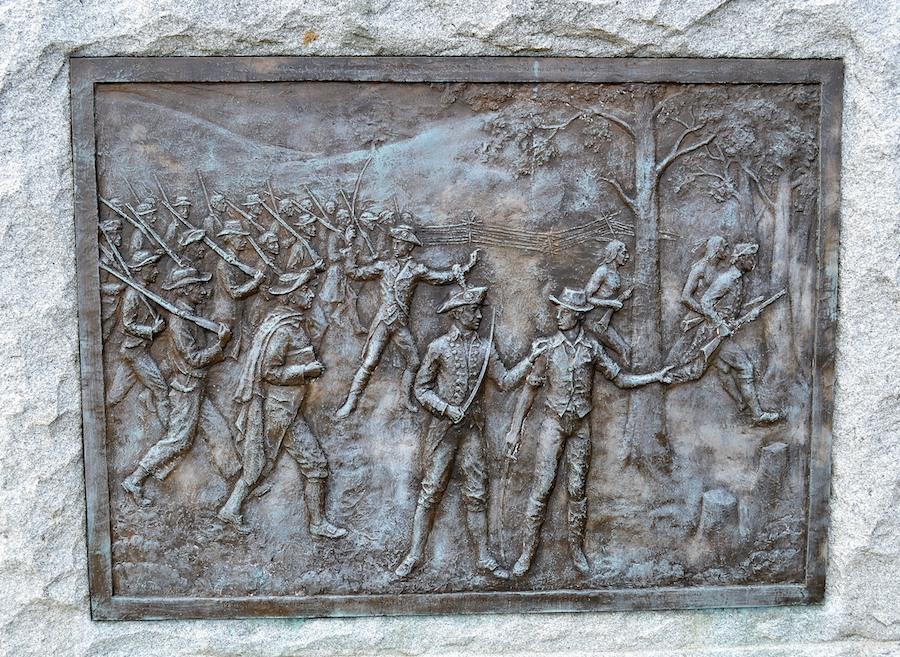 The following morning, September 11th, we gathered at the summit of the hill where much of the fighting took place. Several monuments now stand at the location to commemorate the battle. It was a day of reflection, and the sense of solemnity was aided by the array of pewter clouds that swirled overhead, occasionally sending out bursts of drizzle and gusty winds that fully extended the half-staff flag and scattered the sheets of paper printed with the AmeriCorps pledge, which all members repeated in unison after listening to moving speeches from our program director, Josh Hunn, and the park manager, Liz Wagner, about the tragic events that transpired 13 years ago.

It was fitting to work and create on this day, not solely remembering tragedy, but building upon it and showing through unification that “faced with adversity, we will persevere.” September 11th is now rightly a National Day of Service, and SCA marks this with service events all across the country.

Despite the dreary weather, work continued unabated. The light rain after a period of exceptionally dry weather brought out some interesting wildlife. Salamanders, woods frogs, and American toads emerged from the leaf litter and crawled or hopped about the understory in prodigious quantities. Until Friday, when the ground dried out a bit, we constantly had to avoid crushing these critters while raking and digging. Along with the wildlife we half expected to unearth cannon or musket balls, but all that we uncovered aside from rocks and debris were the degraded remains of a cow skeleton and, unluckily, a ground nest of bald-faced hornets! 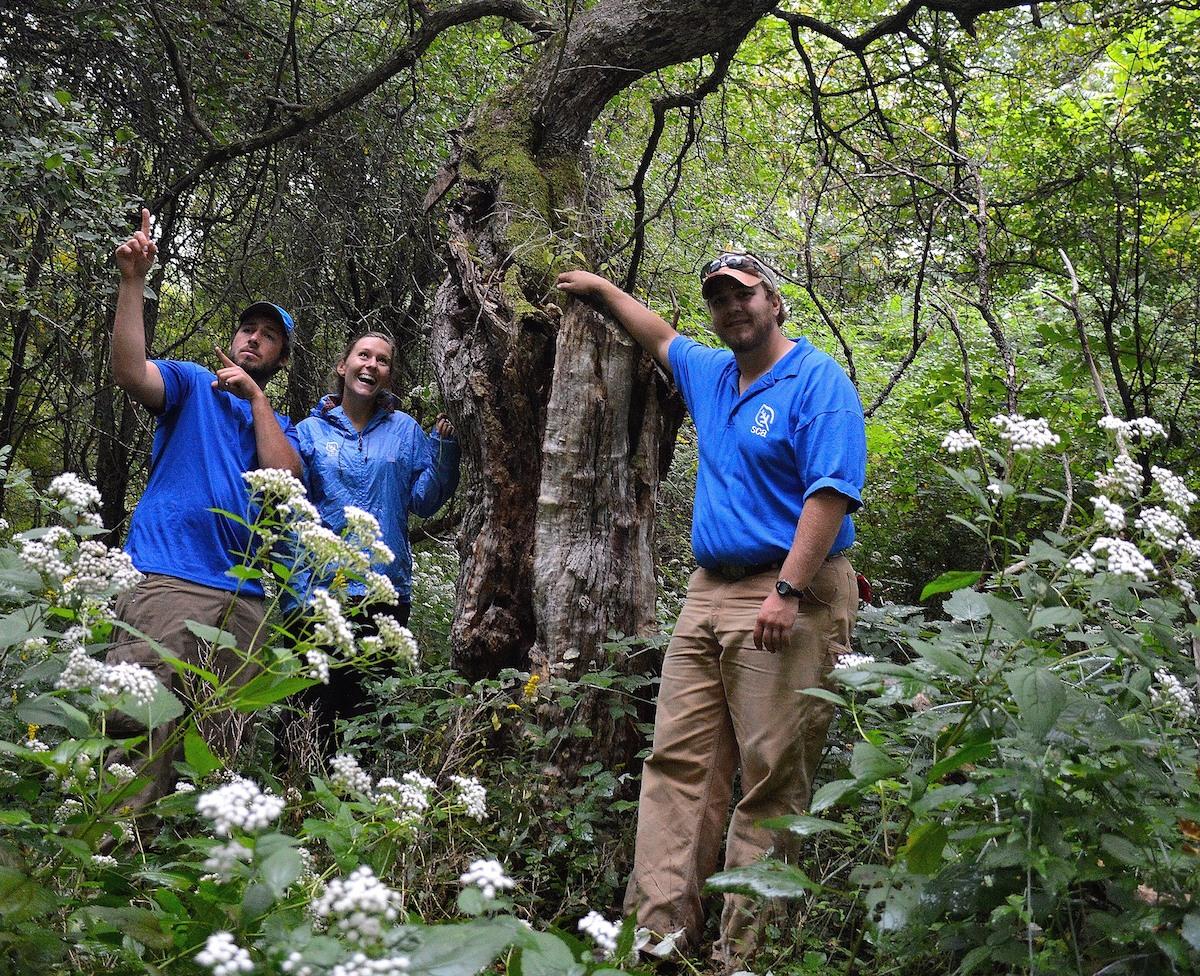 By Friday afternoon, we had accomplished everything we set out to do—three miles of trail were complete and would be available for public use the following day. Before we departed, members wandered the new trail system to examine the handiwork of the other groups. It was all very impressive, and not only the tangible results. As our program director succinctly put it at our final circle-up, “Not until after the first major service project do we really feel like a corps. We certainly do now.”

All photos by Mike Adamovic