From the Brooks Falls viewing platform, I count thirteen individual brown bears. Since the beginning of July, it has been nearly guaranteed to see bears at the falls, but thirteen is the most to date. My routine remains the same—I make note of which bears are present, and begin a count of how many fish each catches. I also start a running list of interactions between the bears—skirmishes, fish stealing, displays of aggression, etc.

At Brooks Camp, park biologists do not tag or collar any of the bears, in order to preserve their natural appearance and behaviors. To whatever extent is viably and safely possible, we want these animals to remain wild and unaffected by human presence. Bears here are identified by physical characteristics as well as behavioral tendencies, and are each given an ID number. Some bears have longer or shorter snouts, oddly shaped ears, different colored fur, or prefer certain fishing spots, act aggressively towards other bears, and so on.

Just thirty minutes into my evening of bear viewing and bear 747, one of the largest bears known to frequent the Brooks River, has already caught ten sockeye salmon. On a good day, a big dominant male like 747 can catch and eat more than 30 fish. That’s about 135,000 calories, or roughly 270 cheeseburgers.

The woman standing next to me asks, “Excuse me, do you know which bear that is? The one that’s catching so many salmon?” I’m not in uniform, but a radio, binoculars and furious scribbling into my notepad must be a dead giveaway. Many visitors to the park have already “gotten to know” some of the bears by watching them on explore.org’s live streaming webcams. I tell her that it’s 747, in his usual fishing location. I explain that he is the second most dominant bear on the river, surpassed only by 856, who is probably off courting one of the last females in estrous for the season.

To my delight, the information excites my fellow bear viewer enough for her to want to know the identifications of all the bears at the falls. After we run through the list and talk about some of their more interesting life histories, the woman remarks, “I just don’t know how you can tell them all apart.”

I didn’t think I would be able to when I first got here. Initially, bears all look, and appear to behave, about the same. They’re all big, brown and scary looking; and they all eat constantly, sleep frequently, and don’t really like to get too close to one another. But as I continued to observe and record what I saw, the subtleties of the individual bears began to emerge. 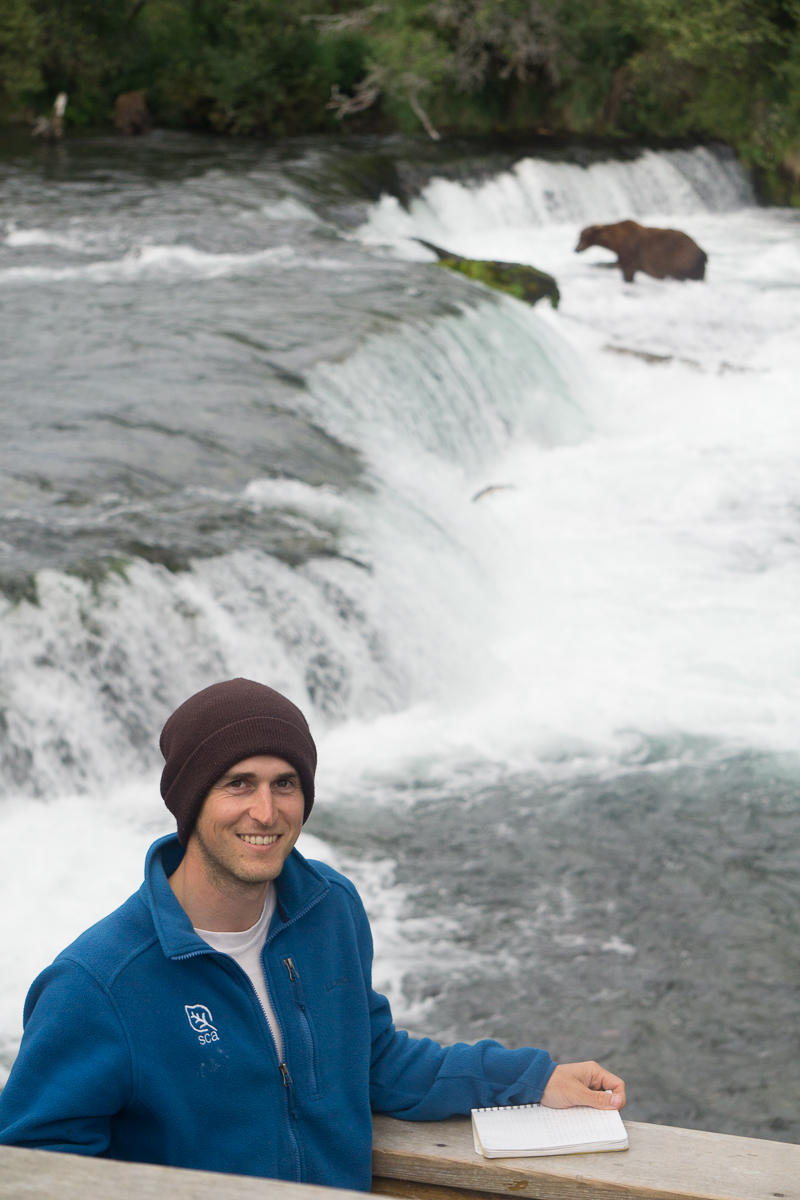 For instance, at first glance bears 856 and 747 look very similar. They are both huge compared to most other bears along the river. All other bears are submissive to them, giving a wide birth when either approaches the prime fishing spots. They have similar shades of fur and are both extremely productive in catching salmon. However, after seeing them both at the falls, some striking differences become apparent. 856 has more blonde-tipped and oval shaped ears. 747’s ears are rounder and shorter. 856 licks his lips constantly while fishing, and looks around frequently, always distracted by something else. 747 is the opposite – stone cold concentration, never moving unless it’s to snatch a fish out of the water.

That’s all well and good, but why should we care? A bear is a bear, right? Well, sort of. For biologists, the reasons for cataloging and monitoring individual bears are more obvious – it offers insight into how bears interact with each other, how they learn from certain experiences, and how and why behaviors can change over time. Having more knowledge of how bears behave and operate helps us protect them as a species.

But for folks viewing from home or who visit the park, what’s all the fuss about?

For one thing, it’s simply entertaining. Knowing which bear is fighting over a preferred fishing location, playing with a sibling, or stealing fish from another bear is like watching the ultimate natural soap opera. But for many rangers, visitors and viewers, it’s more than that. We can learn and be inspired by the individual bear’s story.

In 2007, bear 420 arrived to the falls with a broken jaw and large open wounds on his shoulders, wounds likely caused by another bear. In previous years, 420 was very dominant, able to steal fish and displace less dominant bears from preferred fishing spots. But with a broken jaw, he was no longer at the top of the bear hierarchy. Some wondered if he would survive at all. 420 would no longer steal fish, but was able to use his size to intimidate smaller bears, so could maintain his preferred fishing spots. By slowly and carefully chewing his salmon, 420 was able to maintain his weight and size. A few years later, he was back to being one of the most dominant bears at Brooks Falls.

There are countless bear stories like this one that give us a look into what life is really like for an Alaskan brown bear. Bears can show us resilience, perseverance, cunning, skill and opportunism. We can learn from them and be inspired to develop some of the same characteristics in our own personalities. The ability to distinguish individuals helps us do that.

All through 2016, the National Park Service is celebrating its 100 year anniversary, and we want you to celebrate with us by visiting your favorite National Parks. Katmai is extremely remote and difficult to access, but you can #FindYourPark and find your bear through our #bearcam at explore.org. Get started identifying bears and learning their individual stories with our free bear ID book, available here. 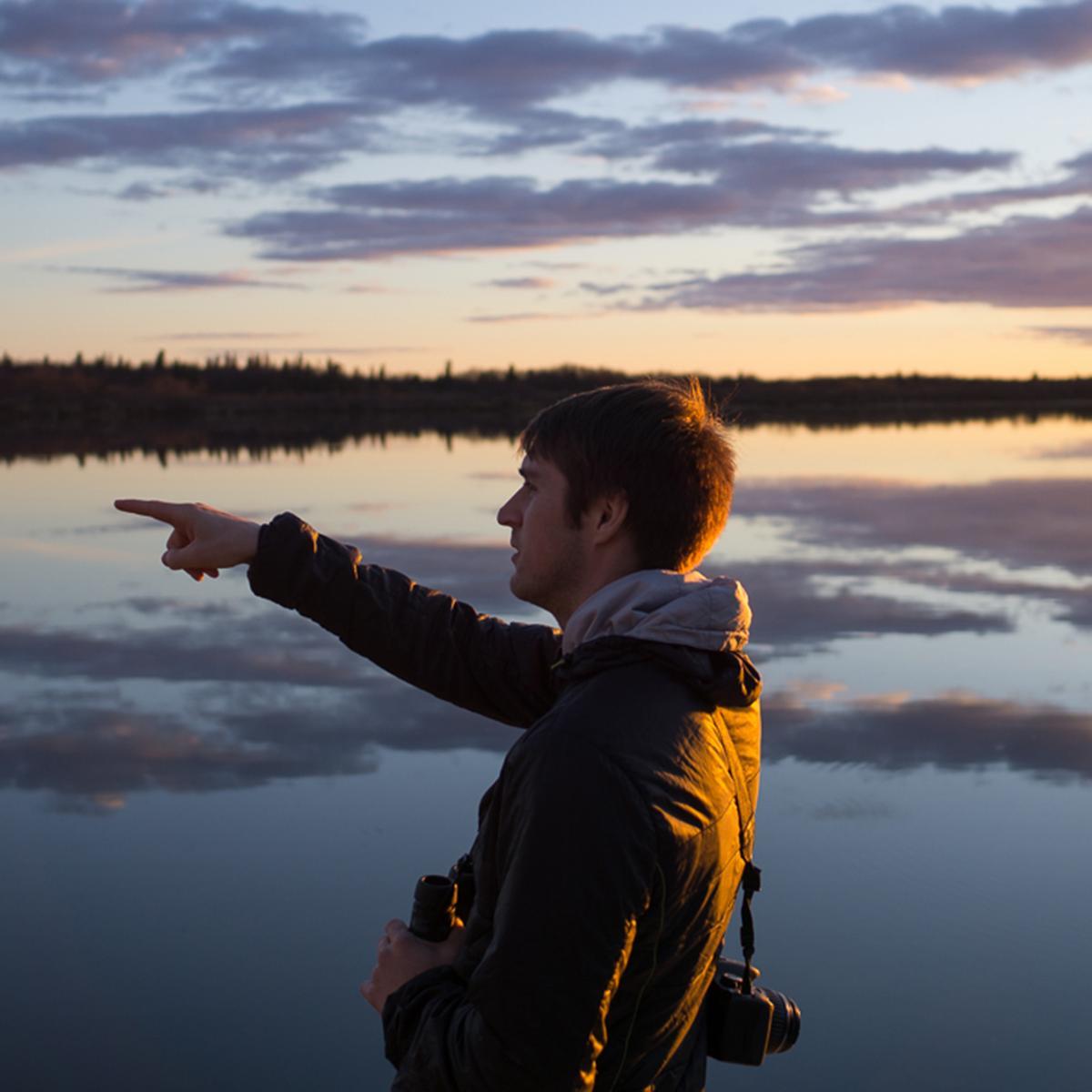 David Kopshever is a recent graduate of the University of Montana, where he studied English and creative writing. His passion for wilderness, wildlife, and storytelling has led him to Katmai National Park, where he works alongside interpretive rangers to educate the public about the brown bears of Brooks Camp. As an SCA Digital Media Intern, David manages the park’s websites and social media pages, and conducts live online events for the public, sharing the life stories of the Brooks River bears.