SCA alum Lauren Ray on how her SCA internship with the National Park Service helped her discover her public-lands-loving hip hop alter ego, the Rapping Ranger. Head to the bottom of the page for her latest video.

I remember the phone call I received one morning in late January 2015 from Ranger Kait at Arches National Park.  Though the weather in Arkansas was blustery, gray, and bitterly cold, this call brought a beam of infallible sunshine that followed me for days thereafter.  “Would you like to come and work with us this season?” Kait asked.  “Well, of course!” I replied.  And that was that.  The most adventuresome, challenging, and invaluable journey of my young career would soon begin— a Student Conservation Association internship at Arches National Park in southeastern Utah. 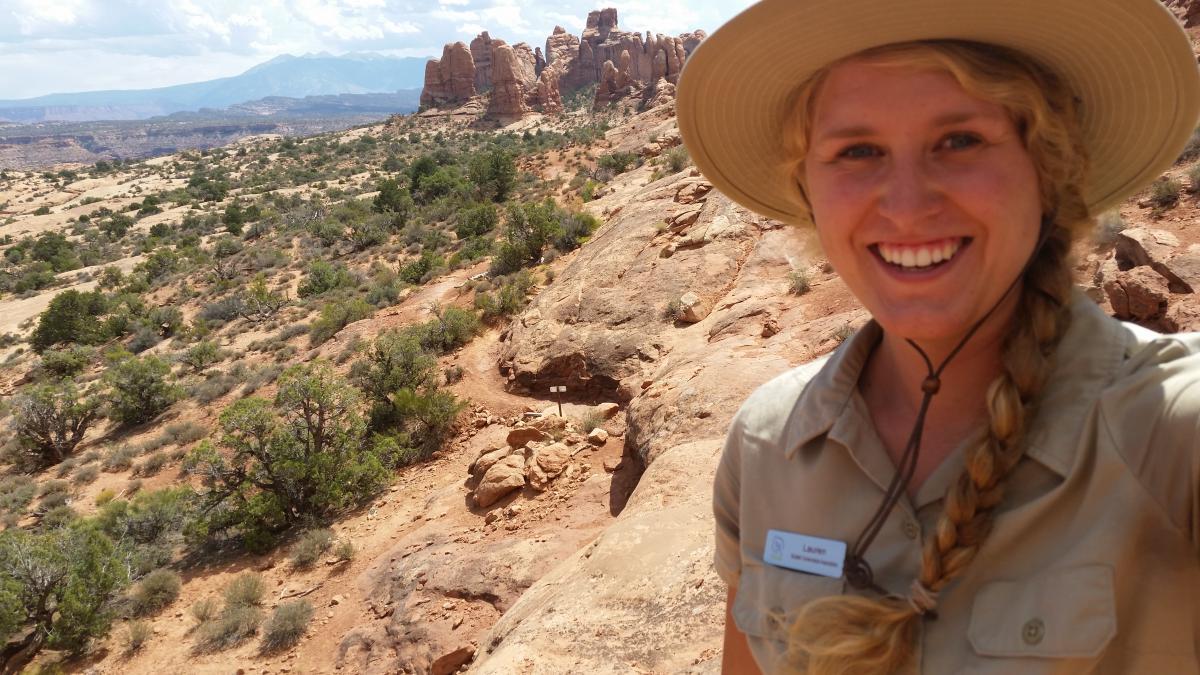 The dazzling, red-rock wonderland of Arches National Park is indescribably alluring, drawing over 1.6 million visitors annually from all over the world into a hypnotic reverie.  Delicate Arch—the one whose photograph frequently graces travel brochures, television commercials, and Pinterest Boards as the epitome of the American West—is the primary landmark that visitors come to see, but, unbeknownst to many, there are well over 2,000 natural sandstone arches within the park’s boundaries.

As a member of the Interpretation & Visitor Services team, it was my duty to help visitors build meaningful, personal connections with a seemingly lifeless landscape in order to promote park enjoyment and stewardship.  This task manifested itself in multiple forms: writing and presenting formal programs like guided walks and Junior Ranger activities; “roving” the park’s trails and viewpoints to make informal visitor contacts; providing professional customer service and park orientation at the visitor center; and assisting with social and multimedia outreach. 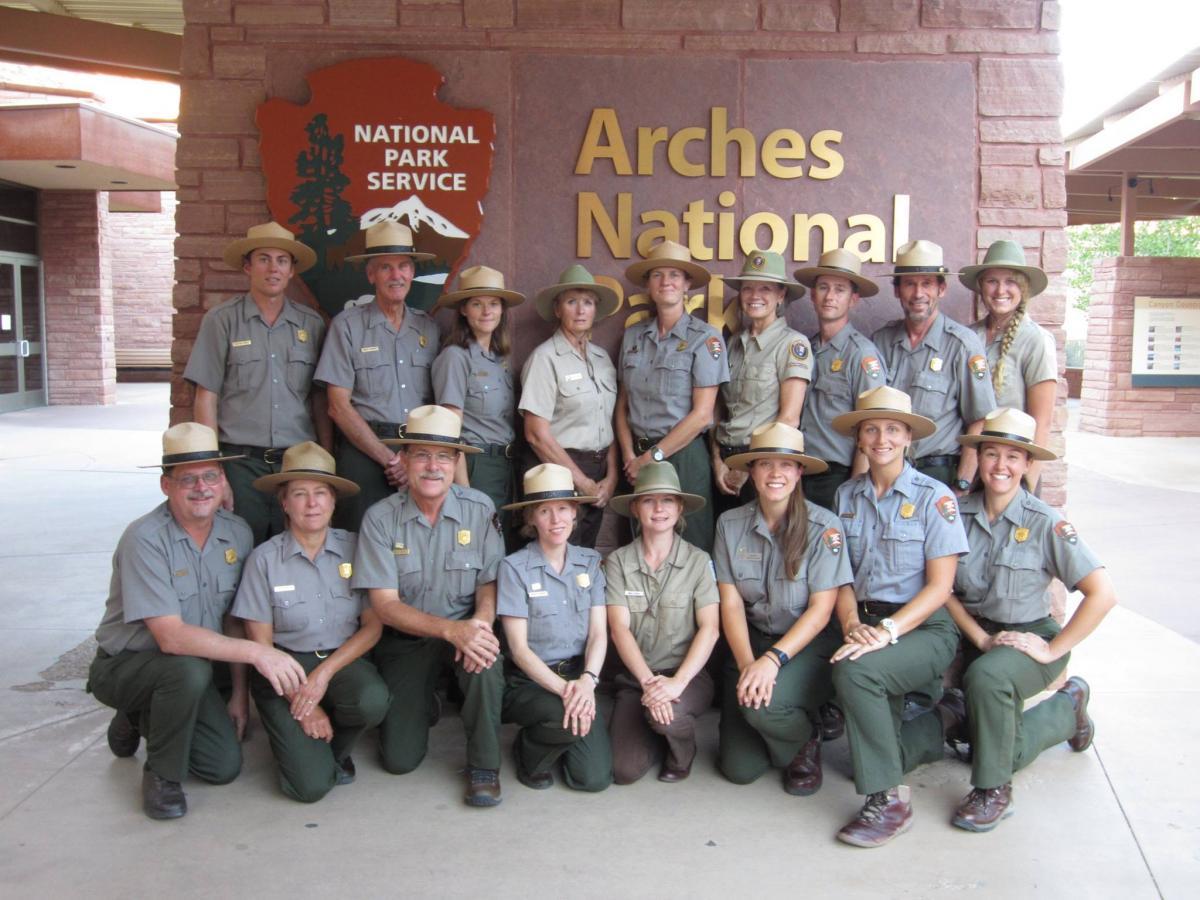 The team of Interpretive Rangers that Lauren Ray worked with at Arches National Park.

After a week of training facilitated by park experts in geology, ecology, archaeology, interpretation, and customer service, it was time to put on the uniform and get out there.  I have always been relatively shy and soft-spoken, so the initial influx of social interaction terrified and exhausted me, especially since I didn’t always know the answers that visitors were looking for.  But I learned quickly that, even when I didn’t have all the answers, I was still respected for being a defender of our nation’s most naturally- and culturally-significant resources.  This gave me a huge confidence boost, both professionally and personally.

It wasn’t long before I realized that I had absolutely found the career path I wanted to pursue.  Seeing program participants’ faces light up when something I said prompted an “A-Ha!” moment was highly rewarding.  Being greeted with the phrase, “Hey, Ranger!” was something I had dreamed of since adolescence.  And, obviously, living in one of America’s most treasured recreational destinations had its perks.

A montage of the most unforgettable moments from Lauren’s SCA service at Arches National Park.

About two months into my season, I was so comfortable dispensing information that interpretive statements came to me in rhyme…as song lyrics.  Before I knew it, I was driving around the Devil’s Garden parking lot, rapping about kangaroo rats and singing about biological soil crust.  I shared my songs with coworkers and park visitors, all of whom agreed that their favorite was “Join My Guided Walk,” a parody of Snoop Dogg’s “Drop It Like It’s Hot.” 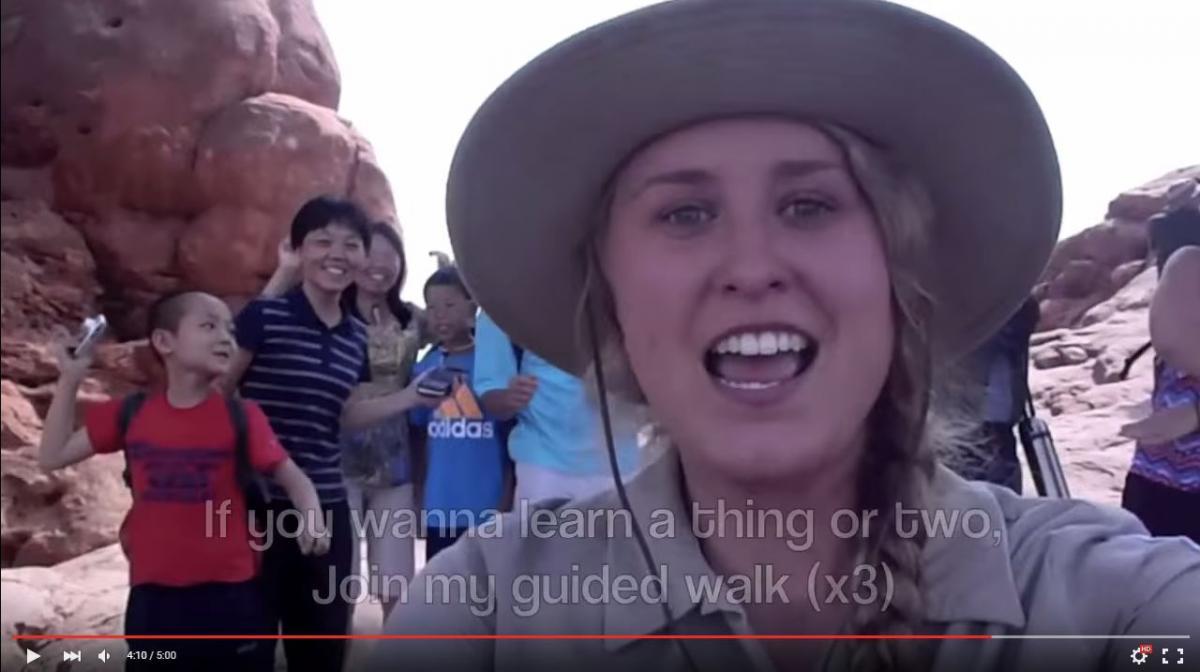 A still from Lauren’s “Join My Guided Walk” video.

In early October, as the aspens on the slopes of Mount Peale took on a golden hue, my season at Arches came to a close.  In the weeks leading up to my season finale, I often contemplated my next move.  What would I do?  Where would I go?  Soon, my mind was put at ease when one of my supervisors informed me of an opportunity at Pecos National Historical Park near Santa Fe, New Mexico.  He explained that the incumbent would report to the park’s Chief of Interpretation who, coincidentally, happened to start her NPS career as an SCA intern at Arches National Park in the 1980’s. A few phone calls later, I was offered the position.

At each park where I have worked in the past year, I have been surrounded by genuine, empowering, like-minded people who wanted to see me succeed.  In my mind, the mentorship and networking opportunities that come with the SCA experience are bar-none the most valuable tools you could possibly add to your professional toolkit.  So valuable, in fact, that Superintendent Cordova of Pecos National Historical Park asked me on my first day of work:

“So, when do we get a rap song about Pecos?”

Needless to say, I immediately started writing a song and filming a corresponding music video.  Most of this I completed on my own (oh, the power of the selfie stick!) throughout the season, but as I was finishing up the final edits of the video in early December, I had a vision of a choreographed “ranger parade” in the final scene.  I envisioned all of the park staff dancing in unison at the focal point of Pecos National Historical Park—an 18th century Spanish mission church.  To get every uniformed employee to participate would be an enormous undertaking, so I shared the idea with one of my supervisors—Ranger Patricia—and she jumped in to help.  She sent out a park-wide email soliciting everybody’s participation on Monday, December 14th at 1:00 PM.  I’ll never forget that date.  Superintendent Cordova solidified this request with a follow-up email expressing his enthusiasm, reiterating the meeting time and location for all staff members.

Within a couple of weeks of publishing our music video, over 150,000 people had tuned in and learned the history of a park that most of them had never heard of.  That’s more than we could have ever dreamed.

I’m not entirely sure where my shell went, but leaving it behind gave me ample room to grow.

Be on the lookout for the latest #RappingRanger music video, this time for Buffalo National River in northern Arkansas.  These songs and music videos aren’t stopping anytime soon.  Sorry.