December 16, 2020 • By cornershop
As they burst to life each spring, deciduous trees fill us with hope. They provide a secure canopy through summer and bring splendor in the fall. Evergreens, on the other hand, are constant. Unlike their cousins, they retain their foliage through multiple seasons and in winter, when most other trees are dormant, evergreens serve as an important source of food and shelter for wildlife.
At this time of year, evergreens are often the most noticeable trees as you enjoy outdoor adventures, so here are some tips for identifying prominent native species in various parts of the U.S.

The northwest is known for its many stunning evergreens and the Western red cedar is a signature tree in the region. Although not truly part of the Cedar genus, these members of the Cypress family thrive in cool, moist climates like Olympic National Park. Their foliage consists of flat, dark green scale-like sprays that, upon close inspection, look like tiny braids or plates—in fact the Latin meaning for the term plicata is ‘folded in plates.’ Unlike other evergreen trees, the seed pods for the Western red cedar are tiny, barely measuring a quarter of an inch. Yet mature trees typically grow to about 100 feet and are very long lived, with some enduring for as long as a thousand years.

This familiar tree is a staple of many western forests and provides numerous ecological benefits including food and habitat for a variety of species and soil stabilization in fire-prone areas. In fact, Ponderosa pines are well adapted to frequent, low-intensity fires thanks to thick, protective bark and their tendency to self-prune lower branches. Ponderosa pines are frequently used as timber and lumber. Unlike other evergreens, Ponderosa pine needles grow in clusters of between one and six from a single point on the branch. The length and number of needles in each cluster (or fascicle) is a key identifying factor. Ponderosas have needle clusters of two or three and each needle is usually between 5-10” in length. They have traditional looking pinecones that are 3-6” long and often quite prickly.

Known for its fragrant foliage, this regional native is often a favorite at Christmas time. Its flat needles are dark green, about ¾” in length, and arranged spirally on their shoots. Fir trees are often confused with spruce trees. One easy way to tell them apart is by the needles. Fir needles are flat whereas spruce needles are rounded. If you can easily roll the needles between your fingers, it is probably a spruce. If you can’t, it’s a good bet that it is a fir. Another effective way to tell a fir tree is by the cones, which sit upright on the branches rather than hanging below them.

Just like the Western red cedar, the Eastern variety is a bit of a misnomer. Unlike its western counterpart, however, the Eastern red cedar is actually a part of the Juniper family. Junipers, including this one, have tiny, scale-like leaves that form fanned out needle foliage. Instead of the seed cones we typically associate with evergreens, junipers produce seed pods that look more like colored berries. The berries are a favorite with many native birds and were often used in Native American cultures for both food and medicinal purposes. However, not all juniper berries may be safely consumed by humans, so don’t eat them unless an expert has identified the tree. 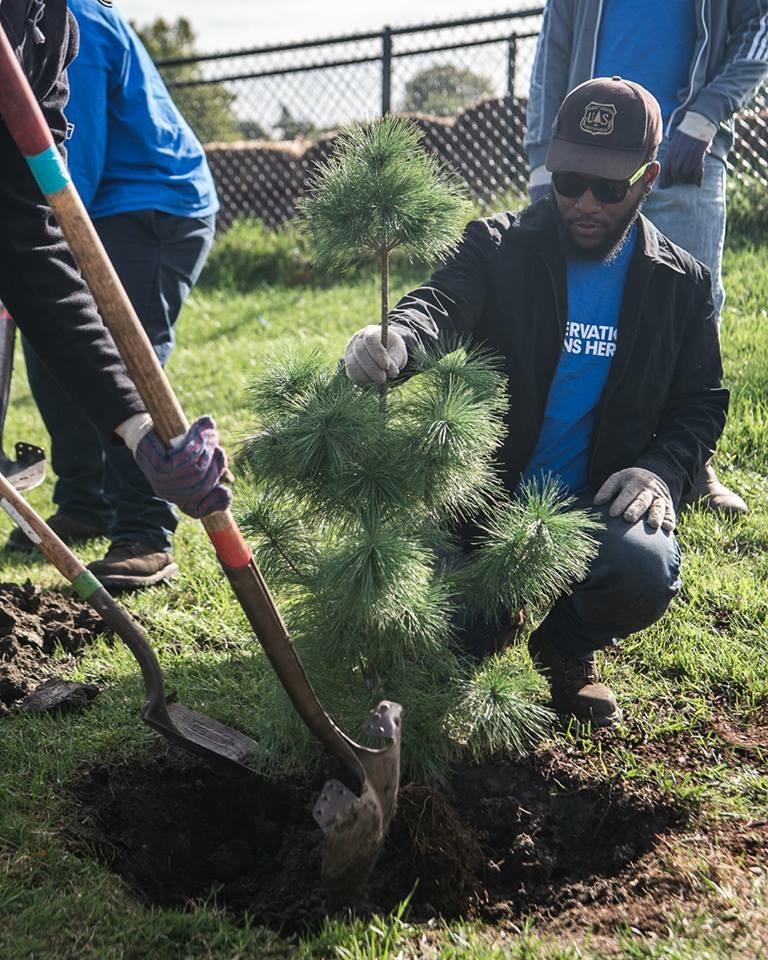 SCA alum planting a pine at an event in the Chicagoland area
SCA does so much tree planting you would be hard pressed to not see members and volunteers outside on a Saturday putting some new saplings into the ground. Most recently, SCA Hudson Valley Corps interns participate in a plan for pine regeneration after a fire at Sam’s Point Area of Minnewaska State Park Preserve caused damage.
To help us continue this work, please make a gift today. Through December 31, all gifts made to SCA will be tripled matched!