As a Centennial Volunteer Ambassador at Padre Island National Seashore, I’ve gotten to meet some pretty cool people. Recently I sat down with Dr. Donna Shaver, Chief of Sea Turtle Science and Recovery at Padre Island. Given we’re both natives of New York, Cornell University grads and SCA alumni, we have much in common. Donna spoke about her professional beginnings, and how SCA changed her life – and the fate of the Kemp’s ridley sea turtle – forever.

Jess: Before you came to Padre Island and before you became an SCA, what did you envision for your career and is it anything like it is now?

Donna: That’s a good question. At Cornell, I was a wildlife biology major. I knew I was interested in endangered species work, and back in that time wildlife bio was a lot of game management and I knew that wasn’t what I wanted to focus on. I really wanted to be involved with endangered species research, restoration, and conservation. So I didn’t really have it focused in my mind exactly what that was going to involve with a particular animal but I knew that was the group I wanted to work on. Then I saw a brochure in Fernow Hall, the wildlife building on campus, and it was the SCA brochure. This was back in the day before personal computers. It was actually paper.

D: Yes! I opened it up and it had the different available projects listed. I read about the project here at Padre Island and thought ‘Great! This is right up the alley of what I’m interested in.’ It was so ideal and I applied. I got it between my junior and senior year of undergrad at Cornell and it changed my whole life. I wouldn’t be here if it wasn’t for that SCA position. It’s funny: I actually had a professor that said, “If you’re not a fan of snowshoeing, you’ll never make it in the wildlife field.” So I said well, we’ll see about that!

J: Really? Yeah, I don’t think you need to worry about the cold and snowshoeing much down here in South Texas. It’s more like sand-shoeing.

J: What were some of the other projects you focused on during your time here?

D: I did some work with birds, ghost crabs, some other things like that. Everything was so new to me. I was from upstate New York, in Syracuse, and I’d never even been to the ocean before or seen a sea turtle. We did a census of colonial water birds, marking white pelicans, surveys of ghost crabs to compare the abundance in the area of beach that was driven on versus not driven on. And, of course, I got way sunburned because I didn’t know.

J: Yeah, it’s a different kind of sun here. I’ve made that mistake a few times myself.

D: Yes, and this was my first time at the beach. But I learned to be more cautious and careful. We also did a lot more fieldwork as opposed to office work because there weren’t really computers for us to use. Hurricane Allen came through, so we did some dune damage studies. We drove a lot. I actually learned to drive an old military surplus Jeep vehicle. We would drive behind the dunes doing reconnaissance and documenting dead wildlife, especially cataloguing the animals that died from vehicle collisions. This was also before a lot of the vegetation was present, so many of the rolling sand dunes were sparkling and bare. There was only one seasonal, myself, and the division chief, and that was it so we were out in the field a majority of the time. It was great for my first time here to learn the resource.
I also lived here in the park so every night I’d walk the beach and pick up different seashells and learn all about them because we didn’t have that in school. I learned them all myself here just by walking the beach and keying them out in a book. I fell in love with the ocean and Texas, and of course the Kemp’s ridley turtle project. 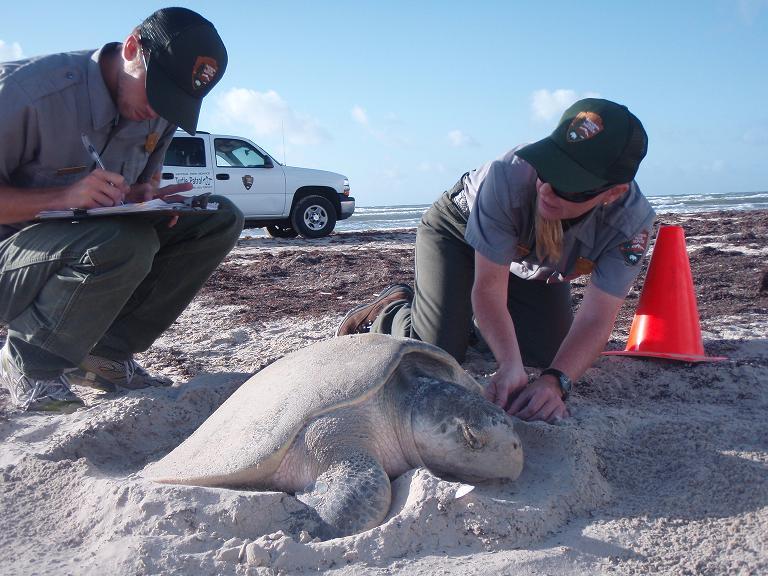 J: What was the turtle population like back then?

D: It was a crisis situation. I think that’s another thing that really hooked me. The population was still going down. It reached a low point in 1985 of only 702 nests found worldwide for the Kemp’s ridley. This project of translocation of eggs to form a secondary nesting colony, called the Headstart program, was envisioned and started in 1978. They imprinted the hatchling turtles to this sand at Padre Island, and released them into the waters only to catch them again in the surf. Then they would grow to about dinner-plate size and be released again, in hopes that their bigger size would help reduce predation and allow more to reach adulthood.
The Park Service had a really big role in this project and a lot of scientists were really worried the species could go extinct. Some even thought it was too late. I was working with the world’s most endangered sea turtle species and it was in real peril and I decided I wanted to dedicate my career to try and save this species from extinction. Many people told me to go and work with other sea turtle species and spend my time trying to help them, but I was already working with the most endangered species and I wanted to continue trying to help.
The numbers in 1980 were a little over 1,000 nests, but it was definitely on the downward trajectory. It’s better now. The numbers are much higher now than they were back then, but still, the current population is less than one-tenth of the historical levels and now its increase has stalled. We were all feeling very optimistic, those of us who worked with Kemp’s for all these decades. We were seeing an exponential increase and the Kemp’s ridley recovery plan had projected down-listing to threatened status by 2020 if the nesting and protection continued. The population modelers predicted this continued exponential increase. That didn’t happen.
In 2010 we went down, came back up in ‘11 and ‘12, down in ‘13, even worse in ‘14, and back up again in ‘15, so it appears to be stalled now and has certainly not returned to exponential. I was a lot younger back then when I dove in to save this species the first time and now my friend jokes that I get to try and save this species again! We’ll work on it. We’ve got a lot more help now in Mexico and Texas than we did back when I started in 1980. We also have a lot more knowledge and people are more aware of what happened and why.
The science is very important too. The work we’re doing now involves satellite tracking and population demographics through tagging and collaborating with others to piece it all together and figure out what exactly is happening.

J: If you could pick one or a few things that you’re proudest of since your time as an SCA intern to now, what would you choose?

D: I’m proudest of the fact that the work we’ve done has helped the population increase, and it’s certainly not all to do with me and my efforts. To have been a part of that is wonderful. To see our numbers go way up on Padre Island, and see the headstarted turtles coming back to nest, which some people didn’t think would even happen, was exciting because that was the first time a sea turtle experimentally-imprinted to an area was confirmed to return to the site to nest. It was also the first time a headstarted turtle nested in the wild. It was a conservation emergency and those who created the project took a gamble that paid off.
My research on sea turtle strandings also helped change some shrimping regulations to produce positive effects on the turtles as well as the fishery. There have been a number of other milestones along the way, too. The increase in community participation and support has been great. When I first got here in 1980, you could go to the stores and you wouldn’t find any sea turtle tee shirts or postcards or trinkets. Now there’s lots of them! The pillars on the causeway and the water tower also feature sea turtles. I’m really proud our work has increased the visibility and support for the sea turtles here.

J: Do you have any advice for young people, especially young women, who want to be scientists?

D: Study and get your education. Get a good foundation in biology to build upon if you’re interested in the conservation field. I didn’t talk about my work much; I had the mindset of ‘Let your work speak for itself.’ Let people see that you work hard, are dedicated, you care, and are dependable. These are all very important things. Persistence, too. Sometimes you have to go off the path to get back on the path. For women, it’s all the same things. There still is that stigma attached to women scientists that we aren’t as qualified, so work hard, be persistent, and don’t give anyone a reason to doubt you or your abilities. Women shouldn’t shy away from science.

J: Any final words or thoughts?

D: I just can’t say enough about SCA. It is a wonderful program to give young people an opportunity to experience a position in the conservation field that they may not be able to get otherwise. Most of the seasonal positions in the government require a little experience so this gives you an opportunity to get to know people and the process of how to apply and see if these types of positions are a good fit for you. They also work out logistics of housing so it’s a good bridge for a younger student just entering the workforce.  It’s changed lives, including mine. I’m a big supporter and a firm believer in it. The opportunities it opens are endless.