Andy Webster is an SCA alum who completed the 10-month AmeriCorps program in Hawley, Massachusetts in 2001. We caught up with Andy this month to discuss how his SCA experience helped him find his way to The Walden Project — a school he is starting in upstate New York that is based on Henry David Thoreau.
SCA:   Hi Andy – thanks for talking to us!
Andy: My pleasure!
SCA:   Why don’t we start by having you tell us about the SCA program you did.
Andy: Sure. I did the 10-month SCA/AmeriCorps program at Kenneth Dubuque State Forest in Hawley, Massachusetts from October 2000 to August 2001. There were about 25 of us living in an old CCC-era bunkhouse next to a beaver pond in the middle of the state forest — it was beautiful!
SCA:   Yes, it is — I’ve been there.
Andy:  (laughs) Especially in the winter. I think we had 5-6 feet of snow that year!
SCA:   Wow!
Andy:  Yeah, it was crazy! So, the way the program was laid out, we spent five months teaching environmental education in local elementary schools, then five months doing trail work throughout Massachusetts. We went all over, from salt marsh projects on the coast in Ipswich, to urban trails in Lawrence, to building bridges and lean-tos in the Berkshires. We did a little bit of everything.
SCA:   Do you have any favorite memories from that year? Any favorite trail projects?
Andy:  (laughs) Too many! The first one that comes to mind is a stone staircase we built going up Wachusett Mountain. As you know, when you are doing trail work with rock, you try to use really big rocks because they have more inertia — they are less likely to move once you get them set into place. My friend Miriam and I started excavating this one rock — we were poking it with rock bars and digging it up with shovels. We had been working on it for like a half hour and it was becoming clear this was a HUGE rock! And it’s funny now because every time I see her we tell the story about this rock and it gets bigger and bigger in our memory… anyway, we should have moved on to a smaller, more manageable-sized rock — one that wasn’t going to eat up another hour of time, but it became this personal mission to move this boulder. We were in too deep and we had to get this thing out of the ground. We were eventually successful and, I’m proud to say, that somewhere on Mount Wachusett is a stone step that is NEVER going to move!
SCA:   That’s a great story. Was rock work your favorite?
Andy:  Yes, I think so. That and carpentry — building bridges and stuff like that. I knew virtually nothing about any of those skills before SCA. I think about what I learned there all the time. We have a little farm with pigs, chickens, goats, and sheep, and every time I set a post in the ground, or build a shelter for the animals, or dig a ditch, I think about SCA and the way we were taught to do things there.
SCA:   Did SCA have other lasting impacts on you?
Andy:  Oh definitely yes! I would say that was, without a doubt, the most transformative year of my life. It seemed like all twenty-five of us had signed up for this program because we trying to figure out our lives. I’d say that was the one thing we all had in common — we had gone through school, and then we were all like, “What now?” We knew that we didn’t want to be stuck in a life where we weren’t happy, but I don’t think any of us had any idea how to (pauses) . . . how to make that happen. How to find your way into an adulthood where you don’t feel like you are selling out or compromising who you want to be. Know what I mean?
SCA:   Yes.
Andy: And I think that was the magic — it was all the conversations you have in your tent after doing trail work together all day. We were all asking the same big questions about life and I think we helped each other find some answers. The people who did that program with me are still some of my best friends. I think that experience cemented those friendships in a permanent way. 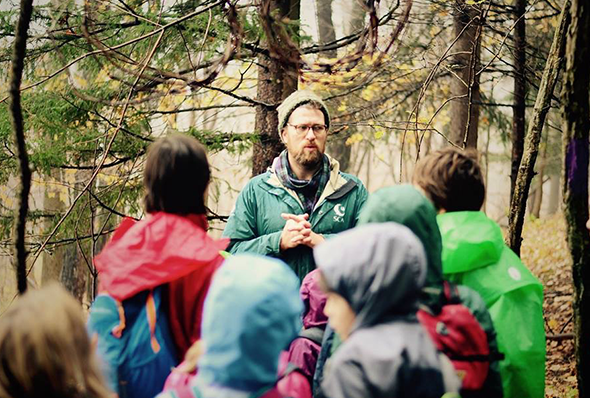 (Andy Webster at Cumming Nature Center in Naples, NY. Andy is wearing his 17 year old SCA rain jacket!)
SCA:   And it sounds like you are trying to create a similar kind of program with The Walden Project. Tell us about that.
Andy:  Yes — absolutely! (laughs) I’m getting faster at describing the program, so… (inhales, dramatically) The Walden Project was started by Matt Schlein in Vermont in the year 2000 — the same year I was in SCA, by the way. The idea is that young people ages 16-20 spend a year living closely with nature trying to figure out who they are, how they got here, and where they are going. And it’s all done through the lens of Henry David Thoreau — he went to live alone at Walden Pond for two years to answer the questions: What is my relationship to myself? What is my relationship to my culture? What is my relationship to the natural world? Walden students try to answer these same three questions for themselves. 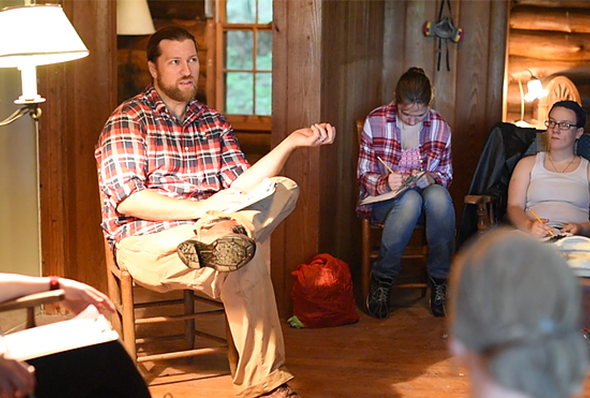 SCA:   So the program started in Vermont and now you are bringing it to upstate New York.
Andy:  Yes. I’ve been teaching high school science for about a decade and I got to a point where I wanted to take students out of the classroom environment and back into nature. I had been trying to do that as a teacher all along, but this is radically different. Instead of giving students short experiences going outside here and there, this is a chance for students to have a much deeper experience. And yes, I would say I am basically trying to give students a year like the one I had in SCA. I’m trying to encourage students to have those conversations about who they want to be and how to get there. (pause) Sorry, I got off-topic for a second there.
SCA:   That’s okay.
Andy:  To answer your question, I approached Matt Schlein last year and asked if we could start a second Walden Project in New York and he was all for it. The Vermont program has been great as far as offering support and guidance in this process. And especially being able to use their results — at the Walden Project in Vermont, they’ve been able to prove that students are 30-50% more likely to attend college or other forms of higher education after graduation than students from their home school.
SCA:   That’s impressive. It sounds like The Walden Project helps students find their direction in life and then makes them more prepared for college.
Andy:  Yes, and that makes sense to me — that’s certainly the role SCA/AmeriCorps had in my life. That was also the year I decided to go to college to study environmental education, and I definitely wouldn’t have, if not for SCA.
SCA:   Thanks so much for talking to us!
Andy:  Thank you!
Andy Webster lives in Naples, New York on a small farm with his wife and four children. To learn more about The Walden Project – New York, visit www.waldenprojectny.com or www.facebook.com/waldenprojectny.