It all started on Monday when our Superintendent Sue approached me and asked for help with the Rosie Rally. What on God’s Green Earth is a Rosie Rally? Well, hang on to your hats. I’m in my sixth week as an SCA Centennial Volunteer Ambassador at the Rosie the Riveter / WWII Home Front National Historical Park in Richmond, California. Though I’m originally from Austin, Texas, I’m here as part of a huge push by the National Park Service and its partners to increase volunteerism and outreach programs in National Parks for the 2016 NPS Centennial.  And one of the ways we’re doing that is by hosting the world’s largest Rosie Rally.

We’re attempting to gather 1,000 women dressed up like Rosie the Riveter in one place in order to break a Guinness World Record. Sounds totally overwhelming, right? But wait, it gets better. Because this is to break a sacred GUINNESS WORLD RECORD, the rules are fairly stringent.

The uniform (which I’m wearing in the photo below) is as follows:

So, even if by some miracle we can get 1,000 Rosies to the park in Richmond, any one infraction can keep them from qualifying.

“Ooh, you wore a regular red and white bandana, not one with polka-dots? DISQUALIFIED.”

“What’s that? Red socks that don’t span the gap between your work boots and pant legs? DISQUALIFIED.” 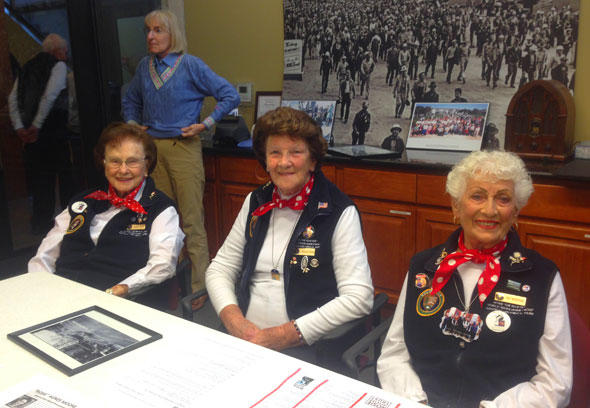 Caption: Agnes, Marian, and Kay, who worked as Rosies during WWII and now volunteer at the WWII Home Front National Historical Park

At the event itself, I will be working with volunteers to make sure all participants are registered and dressed correctly. Note to self: look into finding a bullhorn.

The iconic woman on the “We Can Do It” WWII poster was not originally called Rosie the Riveter. The poster was designed by J. Howard Miller as part of a series to boost morale within the Westinghouse company warehouses in 1942, not as a promotion to lure women into the workforce. On the original poster you can see the detail in the bottom left corner, specifying that the image be displayed for only two weeks.

Rosie the Riveter was an icon that sprang from the 1942 song “Rosie the Riveter” and Norman Rockwell’s subsequent painting for the cover of the Saturday Evening Post. “Rosie” was modeled after the thousands of American women taking up jobs in the defense industry during the labor shortage that occurred after the draft was instituted during WWII. This was a watershed period for the advancement of women in the workforce that preceded the feminist movements that would help to characterize the 1960s and beyond.

Rockwell’s classic image of the brawny woman modeled after Michelangelo’s 1509 painting of the prophet Isiah on the ceiling of the Sistine Chapel was subject to strict copyright laws and as such, was not widely circulated after the war. As time passed, the “We Can Do It” poster fell into different hands and gradually, the meaning associated with the poster began to expand. I was feeling frustrated by modern America’s misuse of a classic symbol, but Ranger Allen made a very good point. He said, “Do not discount the second use of a symbol because sometimes the second appropriation can be more powerful than the first.” Think, for example, of another symbol that has become more or less synonymous with WWII. The swastika: originally used as a Hindu symbol for auspiciousness, repurposed as the symbol of the Nazi party. Which meaning of this symbol is more powerful today? Of course, in Rosie’s case, the implication is far more positive.

Even though Rosie’s name may have changed over the years, as well as the meaning associated with her, it is not the symbol that is important. What is important is the message that symbol conveys. Whether it’s being touted by political figures, pop stars, or 1000 hardworking women in Richmond, California, when I look at Rosie on the “We Can Do It” poster I see a message of empowerment, confidence, but most importantly, inclusion.

I’m so eager for this event to be a success and I must say I’ve adopted it as my own cause. Imagine the atmosphere at the Rosie Rally. This will be a gathering of strength with a theme that will remind everyone there what we are all capable of. Record or no record, the day will be memorable.

It will also be an excellent opportunity for people to #FindTheirPark by raising awareness of our own National Park right in Richmond! Of course we have to thank our partner, The Rosie the Riveter Trust, without which this event wouldn’t even be a twinkle in our matriarch’s eye. We are also working with Spirit of ’45, The City of Richmond, and Richmond Convention and Visitors Bureau for advertising and help connecting with local partners.

If anyone reading this blog is in the Bay Area … please come to our event in your best Rosie outfit! And even better, contact me about volunteering! This event will fall on the 70th Anniversary of VJ Day, and what better way to celebrate the end of the war than by uniting for a common cause to raise awareness of the history we live amidst every day?

SCA’s Centennial Volunteer Ambassador Allison Joyce has broken a Guinness World Record! How? With a first in National Park history: congregating over 1000 volunteers dressed as the iconic Rosie the Riveter in one place at the World War II Home Front National Historical Park.

“When we first got started planning the event weeks ago, our Acting Superintendent warned me, ‘Anything involving Rosie the Riveter takes on a life of its own and becomes huge. Hang on tight!’ And boy was she right. It was incredible to be on the inside of an event honoring such an icon of women’s strength and service. I could almost hang up my blue shirt and polka-dot bandanna right now and call my internship a success…”