Alaska’s Coastal Bears Through the Lens

Before this summer, I had never laid eyes on a brown bear.

I’m not sure how many people actually get to experience the feeling of living their dream at 22 years old, but personally I can tell you that it’s an overwhelming surge of surreal moments. My job today? Fly out to the coast of Katmai National Park to take photos and video of the team that has been collaring brown bears as a part of the Changing Tides project.

As I approached the park plane with two cameras in hand, nerves surged over me. This was it. I was about to board the smallest plane I had ever ﬂown in and ﬂy out to the backcountry of Katmai National Park to document a team working with wild grizzly bears. Being a student from small-town Michigan, this adventure was more incredible than I could have dreamed up with my own imagination.

I could have lasted a week on the buzz that first ﬂight gave me. The mountains, lakes, volcanos, and diversity of the landscape was unlike anything I have ever seen. Little did I know that just a few hours after we arrived at Swikshak, where myself and two other park employees were stationed for the project, we would hear the faint sound of an approaching helicopter. 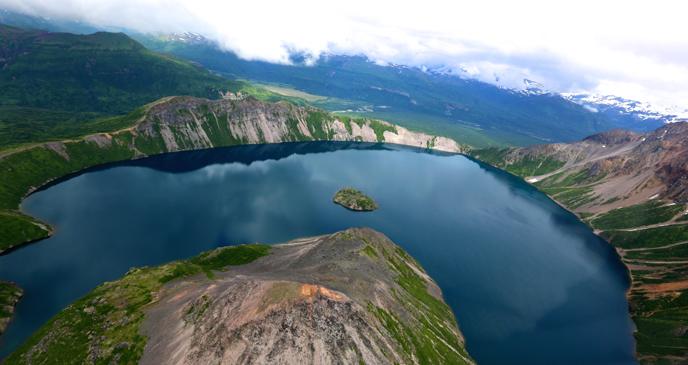 A crater lake sits on top of Mount Kaguyak,  a stratovolcano on the northeastern part of the park. NPS/K. Chritz.

Before I knew it, we were sailing over Katmai again, this time in a helicopter. It truly felt unreal – here I was, experiencing my first helicopter ﬂight in one of the most beautiful places in the world, and on top of that I was en route to see my first brown bear up close. The helicopter landed and dropped us off, heading out with one member of the collaring team to capture the first bear.

When the pilot ﬂew the rest of us to the collaring site, my eyes locked on the bear lying in the grass as we lowered the ground. Grant Hilderbrand, a member of the collaring team, shared that the bear was tranquilized and safe to be around, although she could move her mouth, tongue, and make noises. It would be at least two hours before she regained full movement. 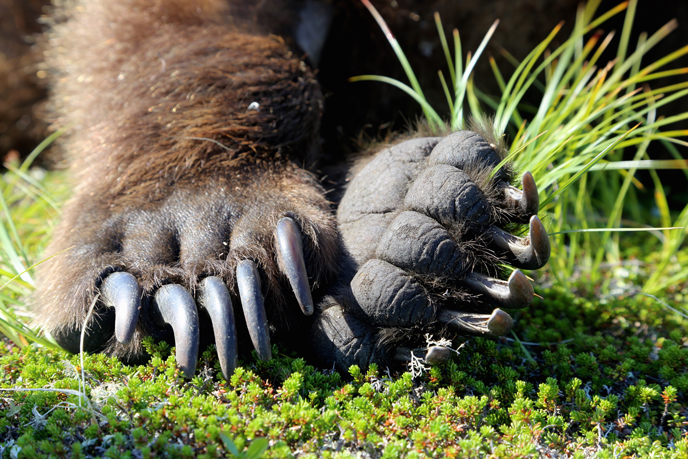 There she was—a giant brown bear. Known by some as a ferocious predator, but by me as the most magnificent creature I’ve had the privilege of being close to. I had an overwhelming feeling of respect being in her presence. Respect for the life she lives, respect for her paws (larger than my hands) that carry her over this terrain that she calls home. I reached down and felt her fur. When my hand raised up and fell back down from her breath, I wondered how on earth I got lucky enough to experience this moment.

I refocused into photo mode, going through the shot list one more time in my mind. What video footage was essential to telling this story completely? How was I going to tell it with both photo and video? Two cameras in hand, I began to work. I looked for the right angles and best light, all while listening intently to what was going on, and being sure to not get in the way of the work being done. This was my most intense assignment as a photojournalist to date. In this fast-paced and unpredictable environment, I had to be at my best. I couldn’t miss a moment. 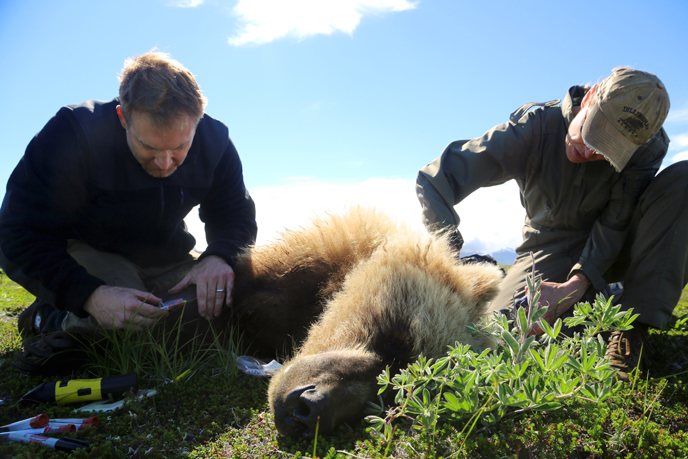 It was like watching a choreographed sequence. Every member of the team had a job, working with eﬃciency and respect for the animal. Shaving a limb to draw blood, checking teeth for age, collecting fecal samples, collaring. Through the lens of my cameras, it all seemed to happen at once. I switched back and forth from taking photo to video, trying to get all aspects of the important work being done in both forms of media. Whether 15 minutes passed or an hour, I couldn’t tell. Time seemed non-existent in these spectacular moments. Just like that, the team was done. The helicopter ﬂew off to find the next bear, and returned within 15 minutes to ﬂy the crew over. 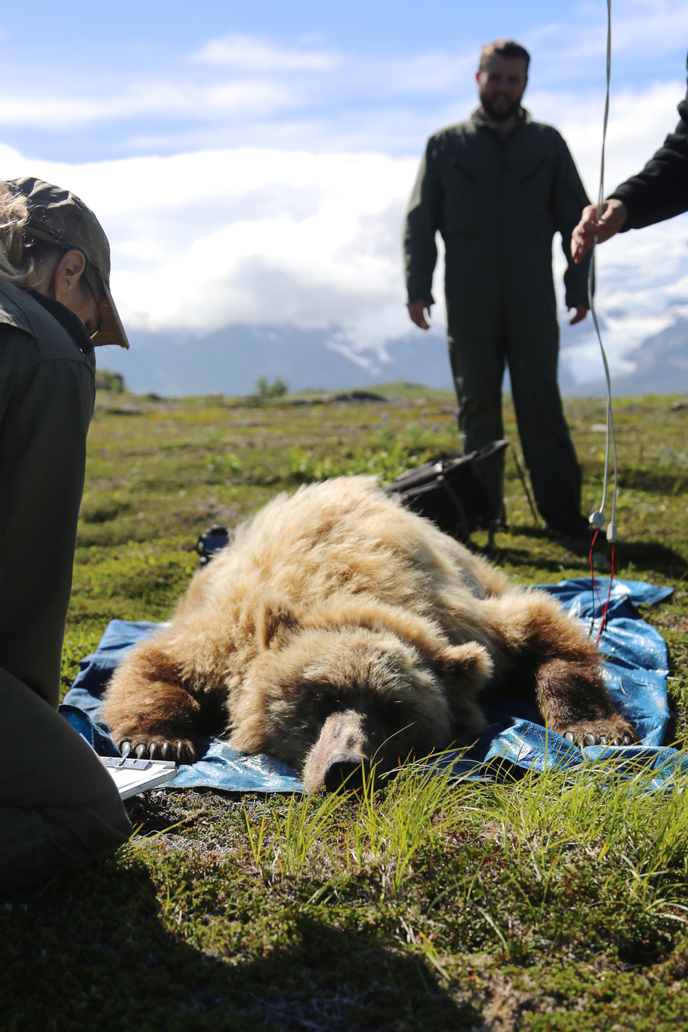 The next bear was equally beautiful, with longer hair than the previous. I was lying on the Alaskan tundra, quite literally nose to nose with a brown bear, taking photos of the scientists working around her. I couldn’t help but think how lucky I was to not only get to meet these people, but to get to share the amazing work they do. Through this data they get to share more than a glimpse of the life of Katmai brown bears, and learn how we can best protect them and their environment. To be able to help in sharing such an amazing story through photo and video is absolutely a dream come true. My next assignment is to continue documenting the work on bears in Katmai by joining a team of scientists conducting observations in Hallo Bay. The dream just keeps building.

Kaiti Chritz is an SCA media intern for the Ocean Alaska Science and Learning Center. She is currently studying photojournalism and biology at Central Michigan University, and is focused on documenting the Changing Tides project this summer in Alaska’s national parks. She originally wrote this blog post for Katmai National Park’s website. All photos by Kaitlyn Chritz/NPS