^ Here is our boat, tied up at the launch at Eagle. The bluff towers over the tiny village.

On my second patrol, June 18th-26th, my supervisor, Josh, and I embarked on a motorboat trip up and down the section of the Yukon River that lies within Yukon-Charley Rivers National Preserve. Our objective was pretty much all-encompassing: we were to get pictures of nearly everything of interest on the river. Our snapshots were to provide material for everything from websites to brochures to art to simple internal documentation. Subjects included endemic flower species, rocky bluffs lining the riverbanks, vegetation, mosquitoes, scenic views, historical artifacts, fossils, public-use cabins, gold rush relics, and more. It was an epic trip. We boated over 800 miles in nine days, worked over a hundred hours, saw seven grizzly bears and four moose, and got completely coated in glacial silt. I think there’s still some silt in the focusing ring of one of my lenses. The Yukon is an enormous, powerful river that inspires reverence in everyone who travels along it. It truly is an experience that must be had to explain. On the first day, we took off downriver in a government boat from the preserve headquarters town, Eagle. We were to cover 100 miles in the first day, which takes about four hours on the boat without stopping—we took six hours, since we stopped occasionally to cut the boat’s motor and shoot items of interest. 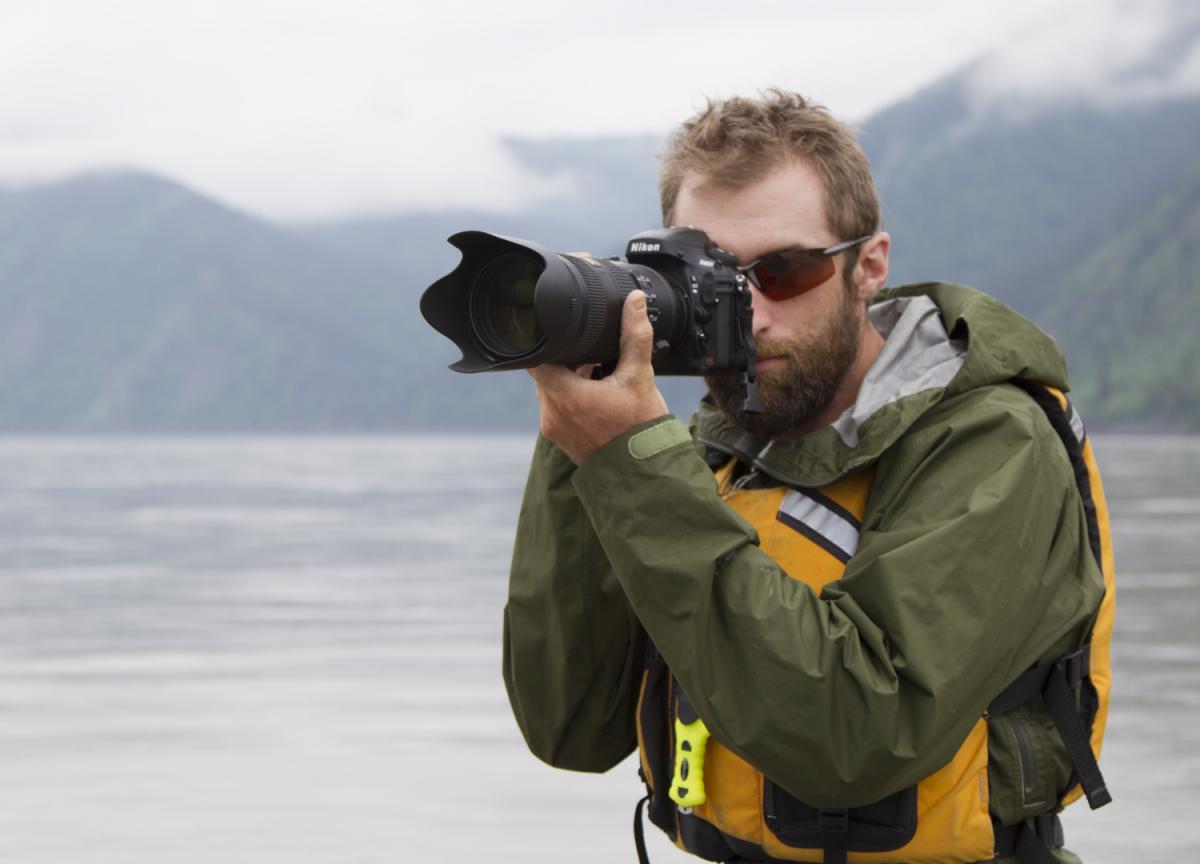 Here is Josh, my supervisor, shooting away while floating down the Yukon.

As of last September, one of the first items of interest that one encounters while going downriver on the Yukon from Eagle is the Windfall Mountain “Fire”. In September 2012, Eagle residents heard a loud boom and felt a small tremor. In winter, preserve personnel went on an exploratory flight to look for what might have happened and they encountered a collapsed ridgeline, flames, and smoke. This is the Windfall Mountain Fire, the burning geological event that not even the US Geological Survey knows what to think about. No one’s sure what happened, but the theory is that there is a shale oil or coal deposit of some kind that exploded and is now burning off. The ridgeline completely collapsed and remains unstable; more and more of it occasionally falling in. The last time I was in Eagle, I saw the US Geological Survey out there checking the site, so we may know exactly what happened sometime soon.

A typical view from the Yukon River. The Charley River mountains loom in the distance above the Yukon/Charley confluence.

urther downriver, around fifty miles from Eagle by boat, near the Charley River’s confluence into the Yukon, the river traveler encounters a view of the uplands of the preserve and the mountains that line the Charley as it flows north. It’s an absolutely beautiful section of the river, and it’s rich with natural history such as geological structures, fossils, and rare plant species—as well as grizzly bears! We saw a sow and her two cubs on a bluff near water level as we rounded one turn; the three of them bolted into the brush the second they saw us. It was nice to have my first wild bear sighting occur while I was inside a speedy motorboat!

Beautiful bluffs like these are so commonplace along the Yukon that this one doesn’t even have a name.

Further downriver, near the end of the preserve boundary, the river is rich with geological material. Each bluff’s structure is unique, and they all exude the sense of being walled into the river, as if the river wants its travelers to float all the way west, across the entire state, to the Bering Sea. 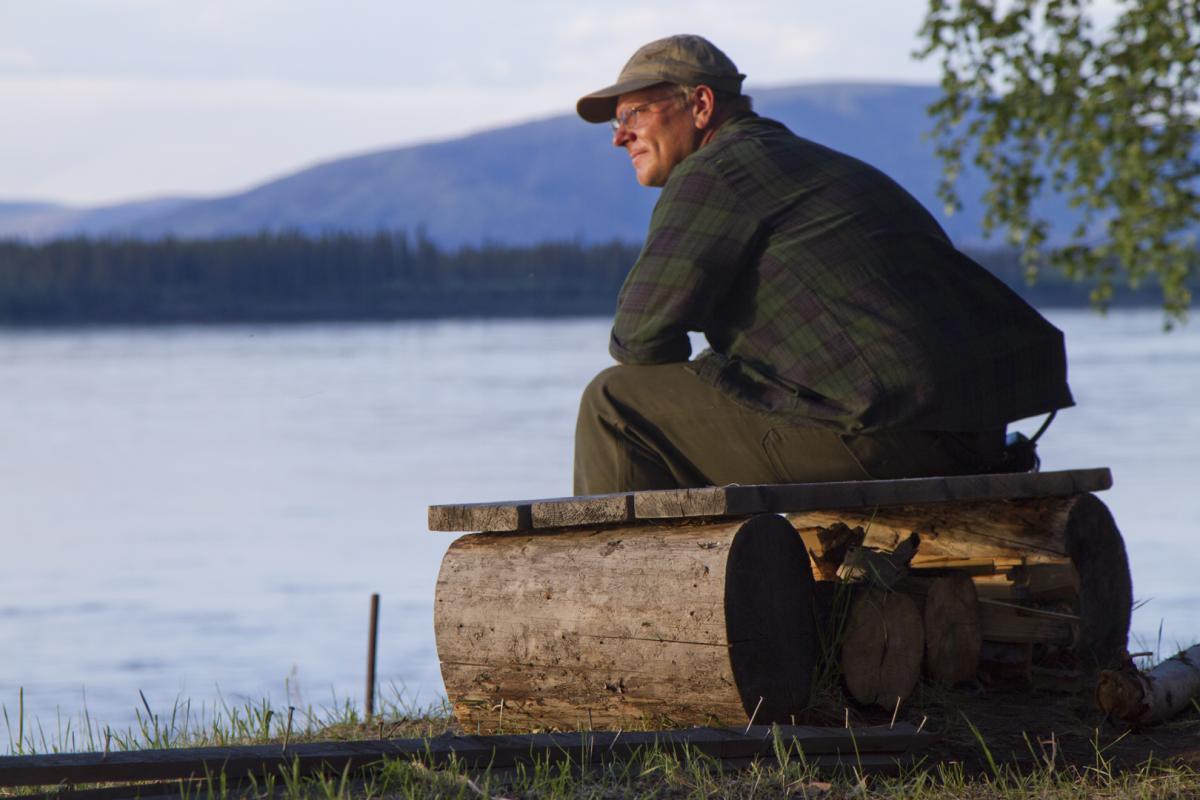 One of Yukon-Charley’s interpretive rangers, Randy, enjoys the evening light at Slaven’s Roadhouse. This shot was taken close to midnight. It takes a long time to get dark up here near the solstice!

We arrived in the evening at Slaven’s Roadhouse, a nearly 100-year-old two-story public-use cabin located on the river left bank of the Yukon, about 100 miles downriver from Eagle. One of the preserve’s interpretive rangers, Randy, was stationed there, as is the norm during summer when the river sees a high number of visitors enjoying float trips. We stayed the night at the roadhouse for probably half the nights during the trip; the roadhouse is a good jump-off point for most river excursions, and we had the luxury of a motorboat, which allowed us to speedily travel both upriver and down. 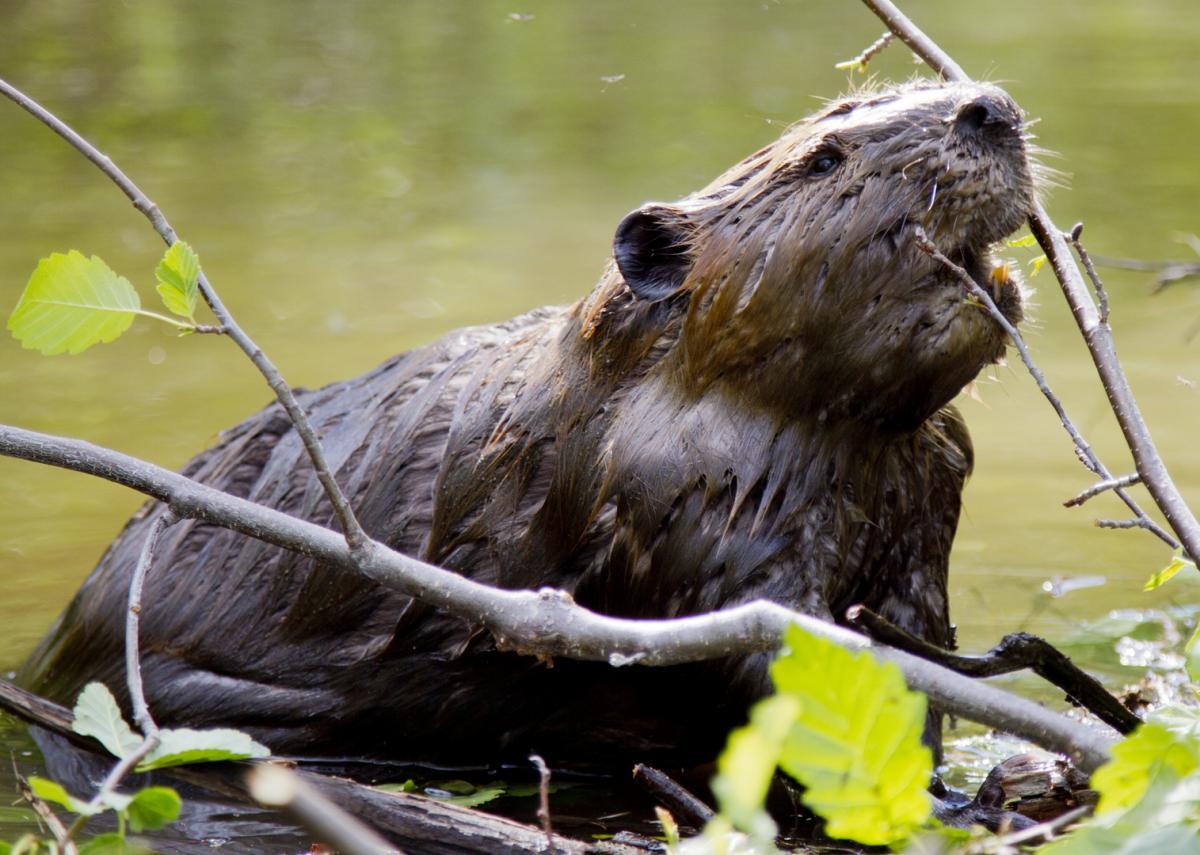 One of the beavers that blocked the ATV path going up the hills from Slaven’s Roadhouse. It wasn’t too preoccupied with our presence.

There’s an ATV trail leading from the roadhouse to an old gold mining camp five miles away, except during our stay the trail was blocked by damming beavers at a creek crossing! The beavers were not skittish; they were fine with us watching them build. 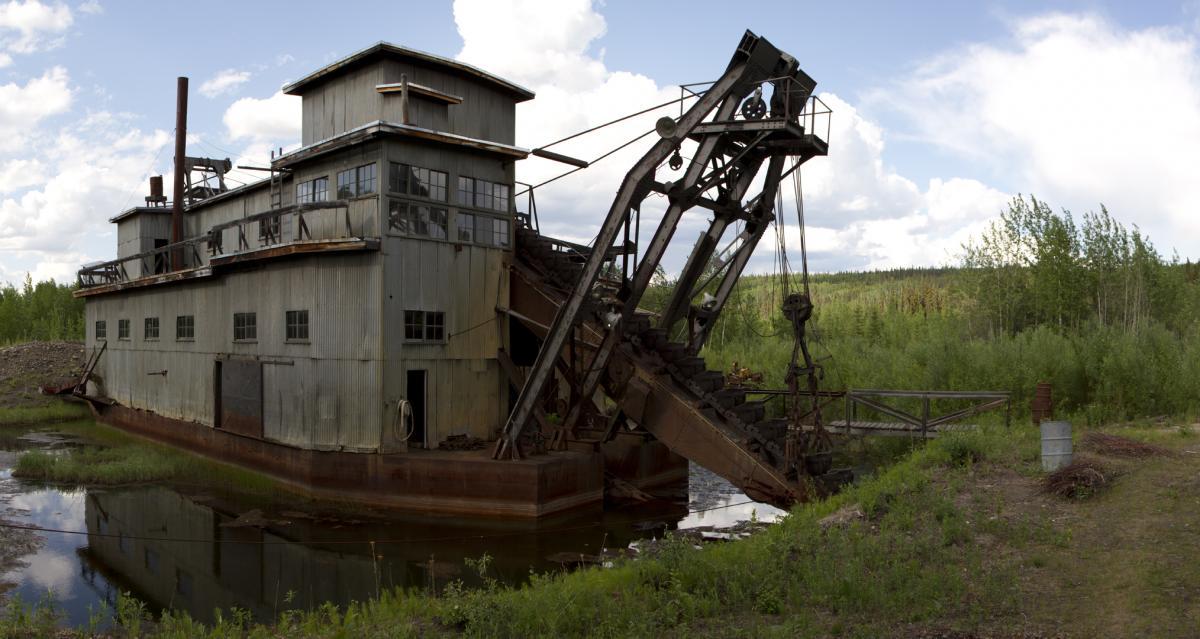 The camp supported the Coal Creek Dredge, a historic gold mining dredge in operation from the 1930’s through the 1970’s in the preserve. Huge mounds of gravel that the dredge chewed up, sucked the gold out of, and spat back out line the Coal Creek drainage area. 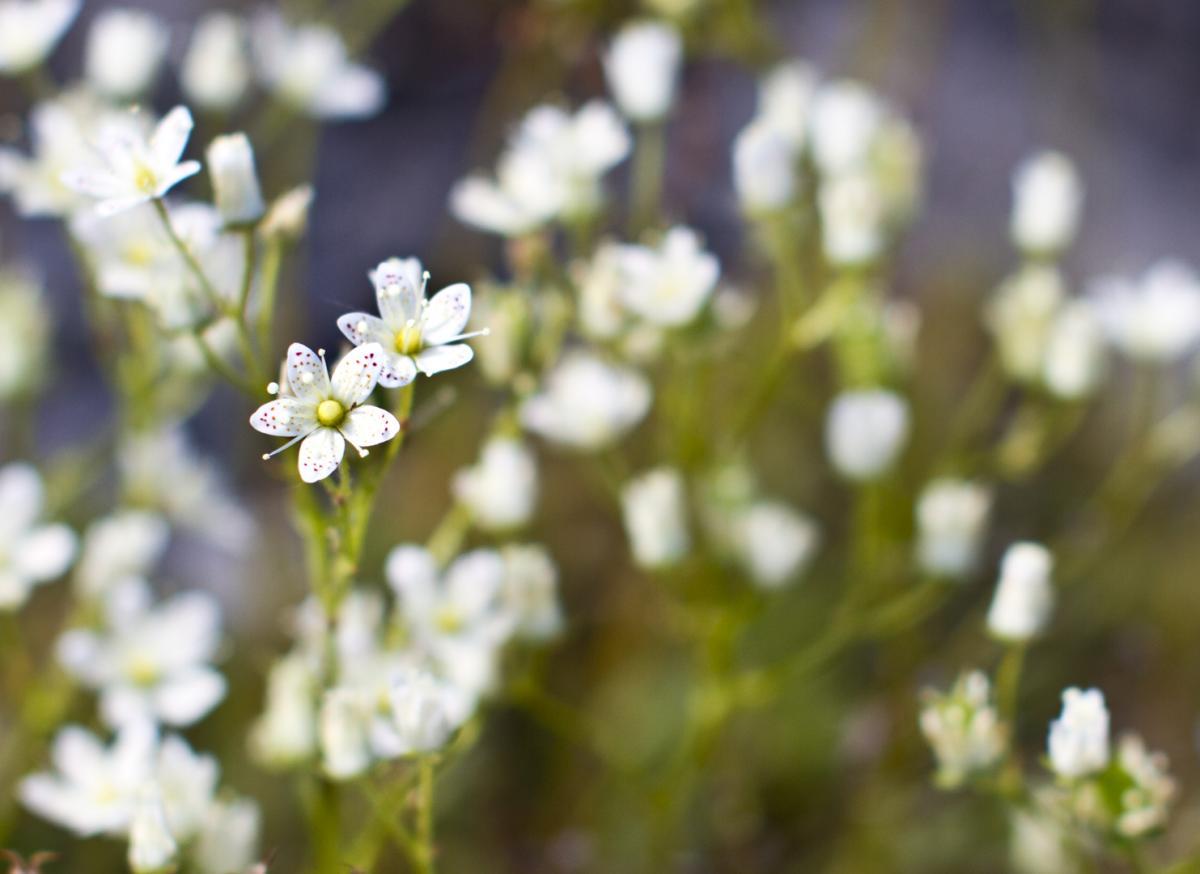 Many, many varieties of wildflowers bloom during the summer on the bluffs and in the forested areas of the Yukon.

The entire Coal Creek drainage is littered with all manner of gorgeous, colorful wildflowers in summer. They are usually teeming with bees, who are so thrilled with the pollen harvest that they don’t usually notice humans—the mosquito is the more troublesome flying insect in Interior Alaska. If you don’t believe me, just check out this video I took of Josh trying to shoot a flower in the midst of a mosquito cloud.I am absolutely amazed at the grandiosity, the variety of life, and structure that is present in the Yukon River corridor. It’s my hope that my images will spur people to come to the area to enjoy and protect this rich environment; it’s worth seeing, and it’s worth keeping, for sure.