“Biden” His Time – with SCA

Joe Biden pictured above (bottom row on the left).

As special events go, this one was transcendent.

In 2009, SCA hosted the then-current U.S. president and a former U.S. president in a tree-planting project to commemorate Earth Day. At the time, no one knew we were also in the presence of a future U.S. president.

Barack Obama and Bill Clinton were the headliners that day, though hardly the only VIPs at Kenilworth Park and Aquatic Gardens in Washington, DC. First Lady Michelle Obama was there and quickly established her superior horticultural skills. And rounding out the presidential party: Vice President Joe Biden and Dr. Jill Biden. 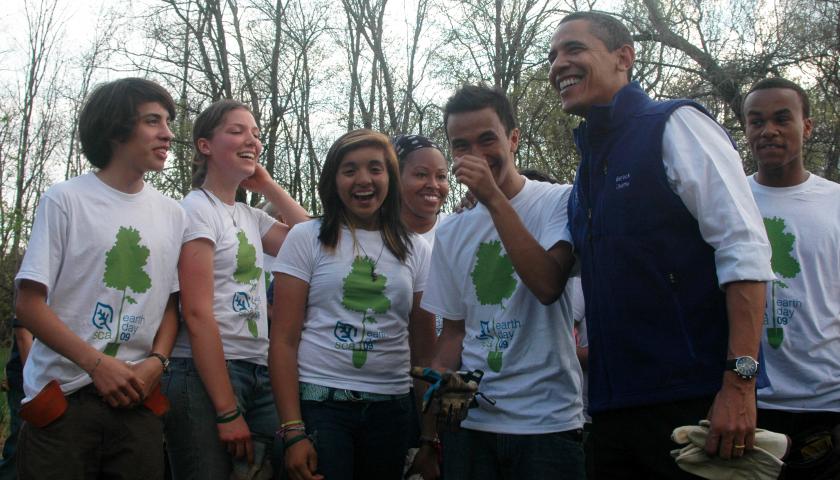 “I met Joe Biden,” recalls Monique Dailey (pictured above fourth from the left), then one of a dozen SCA crew members who worked with the visiting dignitaries and who is now director of programs at City Kids Wilderness Project. “He was very kind and approachable. He was intentional in how he spent time talking to each person in attendance. He even took time to give all the students present advice about college.

“I was impressed by his openness and positive energy. He smiled the entire time and exuded an overall warmness that was infectious.”

The event took place on short notice and under “top secret” circumstances, both of which are typical for these sorts of affairs. Then-SCA Regional Program Manager Rachel Lettre was among those charged with putting the details together and coordinating everything with the Secret Service, an intense experience but one that resulted in an effective showcase for both the White House and SCA.

“I do recall Biden showing off his skills, as he shared that this type of work was not new to him,” says Rachel, who today is MobilizeGreen’s chief program oﬃcer. “He talked about putting fences up around his home in Delaware. Jill Biden worked hard in pink boots that matched the ﬂowers on the redbud tree she was planting.”

“There was so much excitement in the air,” adds former Crew Leader Becca Brown, “but also a little trepidation because of potential bad weather.” For Becca, an environmental planner with the State of Washington, one of the most lasting images of that day is that of Mr. Biden and two crew members “walking back from the truck after picking up shovels, gloves, etc. Biden is between the two boys, his arms draped over their shoulders, like they were all close buddies.”

Once the trees were planted, everyone gathered for some quick photos and, as the skies grew more ominous, most of the oﬃcials thanked the SCA team and climbed into their vehicles. But not Mr. Biden. He continued to share stories until the rain began and was the last to leave.

SCA has worked with every administration since that of Dwight D. Eisenhower, and in recent years has built trails with George W. Bush and promoted national service with Bill Clinton and Al Gore. For more on our historic day at Kenilworth, read our blog from 2009.